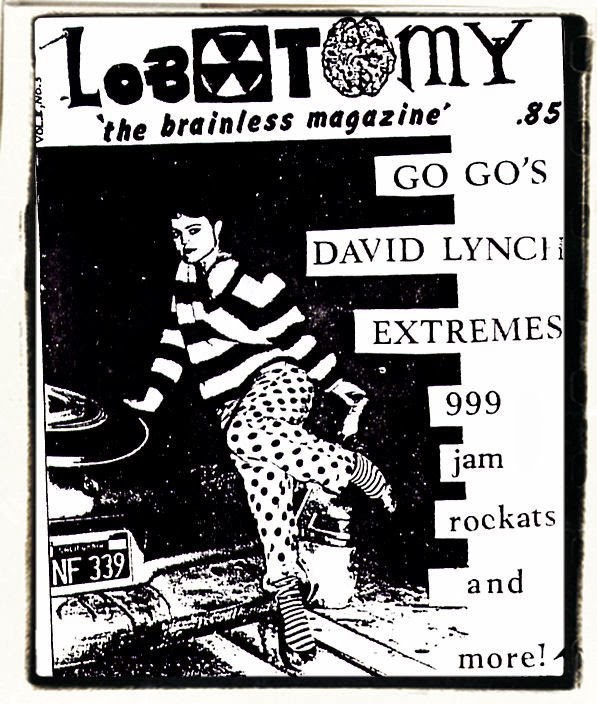 The Go-Go's were formed by Margot around Halloween, 1977, but their debut was at The Dickie's going-away party last May. They played 3 songs, 2 of which were the same song. Since then, Charlotte has joined, and they've gotten to be one of the best bands in Hollywood. The line-up is-Belinda, vocals, Margot; bass, and Charlotte and Jane, guitar and rhythm-guitar.They all sing back-ups,too. Elissa, the Go-Go's beat-girl, wasn't present for the interview……….

Lobotomy: How do people react to you on the street?
Margot: Someone once yelled that me and Belinda were the "Rooster Sisters".
Jane: Well, that's better than the geeks who whistle at you on Hollywood Boulevard!

Lobotomy: What are your techniques for picking up men?
Margot: Put Tuinals in their beer!
Charlotte: I don't have to pick up men, they pick me up!
Belinda: Pull my pants down,and spread big beavers!
Jane: I show them my new underwear - that's always good.

Lob:What do your parents think of the band?
Char: My mom wants us to play Eugene, Oregon.
Jane: My parents like us.They always come and see us-they especially like like us now that we know how to play. because at first, all we did was make noise. They still hold their ears, though, we're too loud for them.
Mar: My parents think it's good I found something I like.

Lob: What kind of jobs do you have, outside the band?
Mar: I do telephone sales.
Jane: She's got a good job, she can have green hair at it.
Bel: I do paste-ups at TEEN magazine.
Lob: REALLY!? Then do you know all the latest dirt on John Travolta and Leif Garrett and stuff?
Jane: I think when she's working, she should just slip some stuff in about the Go-Go's. I bet you could get away with it.
Lob: Yeah, " ... wined and dined with the Go-go's at Cyrano'ss."
Mar: Try TOP TACO! (laughter)

Lob: Do you get lots of boy-groupies?
(unanimous wail) NNNNOOOOOOOO!!!!
Jane: Some nights, Iotsa people come up to me and tell me they loved it, and some nights, nothing.

Lob: What was high school like?
Bel: Oooh, it was crazy! I was a cheerleader in high school. and senior princess...
Lob: NO! YOU'RE KIDDING!! OH,MY GOD!
Bel: But I didn't keep any of my year-books.
Jane: But she's got all these great uniforms at home, with a letter on the chest and "Belinda" across the front. I think she ought to wear them on stage.
Lob: What about you, Margot?
Mar: Oh. I went to Catholic schools all my life...
Char: Well, that explains everything,then.
Lob: Reallv. everyone that I've known that went to Catholic school has been a total loony.
Char: HEY! I went to Catholic school, ya know.
Lob: Are you implying that you're not a lunatic? (laughter)
Jane: I was a total glitter-rocker in high school - everybody hated me. I always used to get real drunk and take drugs during school. And I was always trying to kill myself.
Lob: Belinda, you went to school with Lorna Doom, right?
Bel: Yeah,she changed my life!

Lob: I remember what you looked like when I first met you - frizzy hair, little quiana pant-suits... and you used to go to the Rainbow every night!
Bel: NNNOOO!!! GOD, don't print that - DON'T print ANYTHING about the Rainbow!
Jane: Yes, print it! We used to go to the Rainbow every night after Rodney's.
Mar: My mother wouldn't allow me to go to Rodney's. I had to stuff my bed to get out at night!
Jane: I told my mother that I was going to a movie and then sleeping over at a girlfriend's house. My parents thought I saw every movie about a million times!! "Ma, I'm going to see 'Tommy' for the 14th time"...

Lob: Did you ever read STAR MAGAZINE?
Jane: MMMM-HMMM! It was GREAT!
Lob: They had movie reviews, and they told the whole plot, so you could go to a movie with a guy, and make out the whole time, and then you'd know the whole plot,in case your mother got suspicious and asked what it was about.
Jane: God, that magazine was out to DESTROY American youth. All the stories on groupies, and the make-up hints on how to look slutty.
Bel: YUCK---- I just thought that I have laundry to do.
Jane: Living at home has it's advantages---my mother does all my laundry.

Lob: Did you all used to live at the Canterbury?
Mar: Except Elissa and Charlotte. Belinda was in 414, Jane was in 205, and I was in 301.
Lob: That's like... such a piece of history.
Jane: Yeah, it was such an important part of The Go-Go's. At first, it was really fun, but towards the end, it got real weird and scary.
Mar: The last manager they had, he pulled a gun on me. And he was always drunk. The one before that was in a crime-ring, he had people stealing from the tenants.
Jane: And there were ghosts there. My apartment was definitely haunted...

Lob: Have any of you ever had your palms read?
Bel : Yeah, they always say I'm going to have two kids.
Mar: I was fascinated by witchcraft when I lived in London. My neighborhood had all these cats missing, like someone was stealing cats for sacrifices and rites.
Bel: I was reading the Satanic bible - it was really, really sick. Interesting though....

Lob: Who do you want to play with the most?
(All, wistfully): THE CLASH! THE BUZZCOCKS!
Bel: Hey, lookit my straw, it's got this slobber hanging off it.
Char: Oh, God. Out of nowhere, she comes up with that.

Lob: Who are your favorite bands?
Jane: I love the Buzzcocks.... I LOVE Rockabilly... Gene Vlncent-Oo'Ol+! And I like X, and Levi & The Rockats. Oh, yeah, and I love the Beatles.
Char: I love the Beatles. My record collection is mostly old stuff, I love that.
Mar: Me and Belinda have the same taste - we like reggae and the Clash. And the Deadbeats.

Lob: What kind of movies do you like?
Jane: B-MOVIES!!! Tacky science fiction movies. Horror movies!!
Bel: Mexican horror movies. The really shitty, dubbed ones... and anything with... (whispering reverently) ROBERT DENIRO! I LOVE ROBERT DENIRO!
Mar: I like teen-films. And foreign 60's movies, with the tinny soundtracks. Gosh, I'm tired...

Char: Yes, Margot's had a very exciting weekend. Why don't you tell them about Jail?
Mar: No, it was boring. it was jail as usual.
Lob: C'mon, c'mon, we heard all about the hookers at first saying, "Don't cry baby, don't cry, it's alright". Then 45 minutes later....
Mar: They were screaming "Why dontcha shut up already ??!??" (laughter) I had to go to the bathroom, and this little deputy in a min-skirt came and took me, and I took a real long time to piss her off. Yuck, they searched me with rubber gloves, it was disgusting!
(Leonard of The DICKIES walks in)

Lob: What was the most embarrassing thing that ever happened to you?
Bel: This was like in the 6th grade. There was this guy I really liked, I had the biggest crush on him, and he lived right down the street .I was walking to school, and him and his friend were walking right behind me. Uh..... My laundry was all dirty, and so I had to wear a pair of my mother's underwear, and they were too big. (giggles) SO,my panties were falling down, and I didn't want to tug them up, because I didn't want to seem stupid or anything.... so I kept walking, and pretty soon the underwear was down around my KNEES! (shrieks of laughter) I kept on walking, and they saw it, and were laughing at me - GOD, I was crying! I'll never forget that, lemme tell ya!
Jane: I can't remember ....
Bel: Cutting farts at Girlscout camp....
Leonard : When Charlotte's dad caught me eating out her mom!
Char: When I had my first physical, they didn't tell me to put the little robe on, and I was stark naked... it didn't matter, the doctor was a homo anyway, I found out. Wanna know the Go-Go's secret? Who we're all in love with?
Lob: I'm scared ....
Char: RICK WILDER!
Lob: Wasn't he on H.R. Puff'n'stuff?
Jane: NO! That was Jack Wild! Leonard, why don't you say what you always say to Charlotte, and she tells us, and we get excited...
Leonard: Well, you see, I would like to see The Go-Go's join together under one common cause, to bring them closer, and to raise the morale of the band.
Char: Yeah, it's called group sex.
Lob: Well, I guess it's time for you to say your parting words...
Jane: GOODBYE!! Everyone send me sexy underwear!
Lob: Send Belinda your mother's underwear!
Belinda: Hi, Robert Deniro!
Mar: Come and see us at the Whisky on Mother's Day!

Rick Wilder was the singer with The Mau-Mau's and the term "UGLY" does not do him justice.I saw him in LA in 2000 and his condition has not improved in the last 25 years. I sure hope Charlotte was joking but then she had a fling with Leonard of the Dickies and he ain't no Tyrone Power either.

Re: Margot's jail time: In the gossip section of this "Lobotomy",there is a report of her being jailed for drunk and disorderly along with Dennis Crosby (Bing's grandson) and Brian Tristantjater known as Kid Congo of The Cramps and Gun Club). While there they ran into fellow jailbird, Pat Smear. 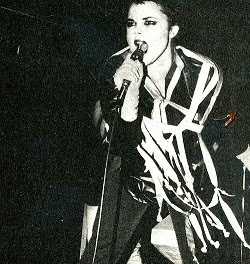